Say No To Neil Gorsuch For Supreme Court

One of the reasons I changed — one of the primary reasons — a friend of mine's wife was pregnant, in this case married. She was pregnant and he didn't really want the baby. And he was telling me the story," Trump told Brody. "He was crying as he was telling me the story. He ends up having the baby and the baby is the apple of his eye. It's the greatest thing that's ever happened to him. And you know here's a baby that wasn't going to be let into life. And I heard this, and some other stories, and I am pro-life. —Donald J. Trump

Our 45th President told us he would put pro-life judges on our Supreme Court. However, those who helped him with the list of conservative judges were both the Federalist Society, and the Heritage Foundation (called Heretic Foundation by many of my well-educated friends). 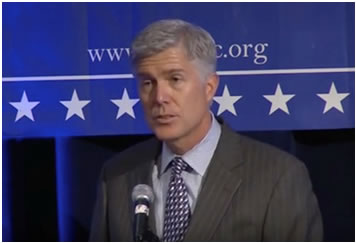 Neil Gorsuch is Not Pro-Life

The latest choice we're now hearing is at the top of the list is Neil Gorsuch. Neil Gorsuch is NOT pro-life. His selection would violate Trump's pledge to nominate a pro-life justice to the Supreme Court. Roe v. Wade would not be overturned for 40 years if the 49-year-old Gorsuch is picked. Forty million more babies would be murdered in their mothers' wombs with this choice.

The pro-life movement has only a few hours or days to object, protest, criticize, and veto the nomination of this pro-choice candidate. Trump floats these trial balloons to see if people object. We must strongly object, and please speak out loudly now.

Gorsuch has never said or written anything pro-life. Andy Schlafly knew him in law school and afterwards, and has reviewed his opinions and his book. He's written multiple opinions that demonstrate he is not pro-life.

For example, in the case of Pino v. U.S., Gorsuch discussed whether a 20-week-old "nonviable fetus" had the same rights as a "viable fetus." Gorsuch, showing that he is not pro-life, indicated that his answer is "no" unless the Oklahoma Supreme Court specifically found rights for the "nonviable fetus." Rather than render a pro-life ruling, Gorsuch punted this issue to the Oklahoma Supreme Court for it to decide. Gorsuch's approach is similar to the unjust approach based on viability that underlies Roe v. Wade.

More information, including how Gorsuch opposes overturning precedent even when it is wrong, is here. He supports special rights for transgenders, too. And he is no Scalia, as Gorsuch was not even on the Law Review in law school.

We've been down this road before, and it doesn't work for Republican presidents. Andy Schlafly recently spoke at a large conservative conference in Michigan, a state Trump carried by barely 10,000 votes based on immense efforts by pro-lifers there. That margin disappears if Trump is misled to break his pro-life pledge for the Supreme Court.

Evangelicals spoke out and vetoed the previous top choice, Bill Pryor. Now it is urgent that pro-lifers speak out immediately and veto Neil Gorsuch. 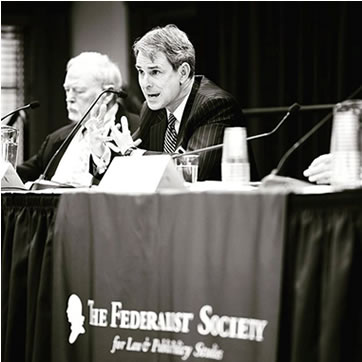 Who is the Federalist Society?

The Federalist Society, is allegedly an organization of conservatives and libertarians seeking reform of the current American legal system in accordance with a textualistic or originalist interpretation of the U.S. Constitution. It is one of the nation's most influential legal organizations, masquerading as something they are not.

The Federalist Society began at Yale Law School, (home of Skull and Bones), Harvard Law School (that bastion of higher liberal learning), and the University of Chicago Law School, (home of Bill Ayers and where protestors disallowed Trump rally). It originally started as a student organization which challenged what its members perceived as the orthodox American liberal ideology found in most law schools. Doesn't this actually make you laugh when these three Ivy league schools are known as having a Marxist agenda?

There are ways to respond, and as my friend Devvy Kidd said, "We have to flood the White House with calls, tweets, emails. This has worked in the past if enough people do it."

The caller simply needs to say:

I strenuously object to Neil Gorsuch as a supreme court justice nominee. He is not pro-life. I urge President Trump to nominate:

You can email the White House here.

Another option is to send a fax signed by as many people as possible. If people belong to a church or some group, just do a short letter with all the signatures and fax it. Phone calls can be ignored, but a pile of 50,000 faxes can't. Time is of the essence.

It is up to the American people to let our President know where we stand. Life is God given, and the Lord said in Deuteronomy, CHOOSE LIFE! Let President Trump know we want Pro-Life Justices!

[P.S. In order to wake up the population, we need to reach more people. Please use this material, and call into talk radio programs (like Sean Hannity, Michael Savage, Rush Limbaugh etc.) and mention NewsWithViews.com on the air while discussing the content of this article, write letters to newspaper editors, and speak to your friends. Spread the word, and in doing so, we have a chance to save America.]

Tweet
Published in Articles
More in this category: « The Renewed Drive To Exit The United Nations Robert F Kennedy's Devastating Quotes On Vaccines And The CDC »
back to top